Marshall Pruett says…
Plenty of factors and considerations are made while concocting these reviews. Of the two metrics I use on a regular basis – the company a driver keeps in the standings, and where they finished last year–it would be easy to conclude Charlie Kimball aka “Charlie Murphy” regressed in 2014.

Kimball broke through to win his first race in 2013, and put in a strong body of work to claim ninth in the Drivers’ championship. It set the Californian up for one of two outcomes this season, and unfortunately for Chuck, it didn’t involve a move deeper inside the top-10. Instead, Kimball dropped from ninth to 14th, and despite having the full might of Ganassi’s four-car program to lean on, found himself behind the mercurial Josef Newgarden and Sarah Fisher Hartman Racing’s single-car effort.

Dropping five spots in the championship and getting beaten by a kid on minuscule budget could be a humbling outcome for Kimball, and I hope he takes it to heart, but a deeper look at his results reveal there’s more to Charlie’s season than just his place in the final standings or who finished directly ahead of him.

The Novo Nordisk-sponsored driver spent his first two seasons at Ganassi without making much of an impression on the race track. Nice kid, great sponsor, fantastic salesman for his sponsor’s product, but nothing to worry about once the green flag waved. In 2013, and with Ganassi dropping down to three full-time cars, Kimball found an extra gear we didn’t know existed. 10 top-10s, including his win at Mid-Ohio and a podium at Pocono seemed to indicate he was finding the swagger that had been missing.

A return to four cars in 2014 could have taken some of the attention away from Kimball, and even with new teammate Ryan Briscoe recording an underwhelming season in the No. 8 Ganassi Chevy, the Aussie still managed to finish three spots ahead of Kimball in 11th. If there’s one glaring item in Chuck’s season to take away as a positive—as positive as you can be about finishing 14th in a Ganassi car – it’s his increased competitiveness. 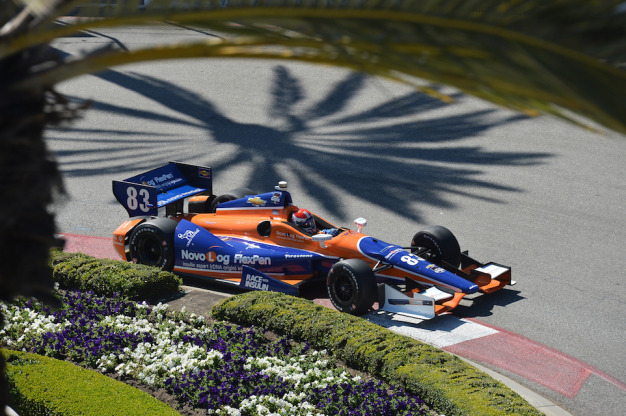