Indianapolis to ring in 2015 with IndyCar descent

A Verizon IndyCar Series car will help residents of Central Indiana ring in 2015 as a key part of a community-wide, public New Year’s event announced for by Indianapolis city officials.

The car, suspended by a boom and a crane, will begin a 75-foot descent over the pedestrian mall on Georgia Street, which along with Bankers Life Fieldhouse, will serve as the site of the event.

The car’s descent and countdown begins at 11:59 p.m. on Dec. 31. When it hits the ground at midnight, a fireworks display will help celebrate 2015’s arrival.

The family friendly event, which will kick off with an Indiana Pacers-Miami Heat game, will feature live music by The White Panda, An Innocent Band, Corey Cox, The Groove Factor, Greta Speaks and House DJ, DJ Lockstar.

“Indy showed the world it could host a great celebration Downtown during the Super Bowl,” Ballard said. “I’ve always thought we should have an outdoor (New Year’s) celebration. There’s no reason why Indianapolis couldn’t do this and celebrate New Year’s Eve like so many other cities around the world.” 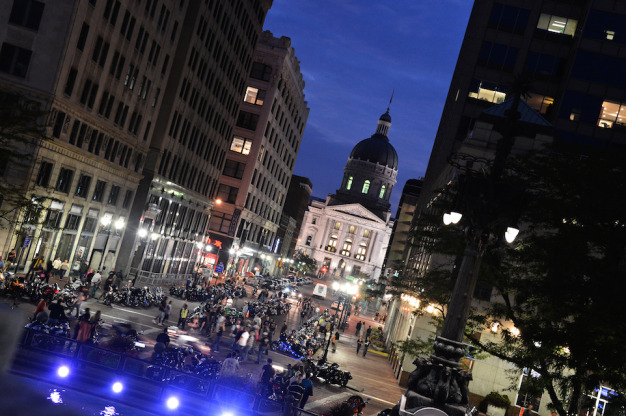