Postseason profile: ‘Fight as hard as we can’

The driver: Kimball, of Camarillo, Calif., turned 29 on Feb. 20. … Married in September to Kathleen Thompson, the couple resides in Indianapolis. … Diagnosed in 2007 with type 1 diabetes, Kimball returned to racing in 2008 – claiming a podium finish in his first race. … Received a Jefferson Award for public service in 2012 for spreading the word about diabetes awareness and management. … His father, Gordon, worked with several Indy car and Formula One teams.

The gist: Kimball has made 68 Verizon IndyCar Series starts over four seasons in the Novo Nordisk Chip Ganassi Racing car. … He earned his first series victory in 2013 at Mid-Ohio. … He competed in Indy Lights in 2009 and 2010, earning four runner-up finishes in 13 starts in the latter.

Season stats: Kimball led the Verizon IndyCar Series in positions advanced relative to his starting position (see chart below). He recorded a best finish of third at Belle Isle2, moving up 17 positions, and had 10 top-10 finishes overall. … He had a late April through early June stretch of five top-10 finishes in six races, and had a four-race stretch from mid-July through early August of consecutive top-10 finishes. Closed the season with 16th-, 21st- and 12th-place outings. … Season-best qualifying of sixth came in two of the final three races – both on ovals (career-best qualifying is fifth in 2013 at Barber, Mid-Ohio and Auto Club Speedway). … Was running at the finish in 15 of the 18 races.

He said it: “(About leading series in positions advanced) We had a great car and were able to overtake and maybe didn’t make the most of it in qualifying. The last three races I think we took a step forward in that realm. I think that shows marked improvement over early in the year in qualifying, but also shows that we never give up. We just fight as hard as we can all the time.”

The chart (below): Looking at how Kimball finished relative to his qualifying position: 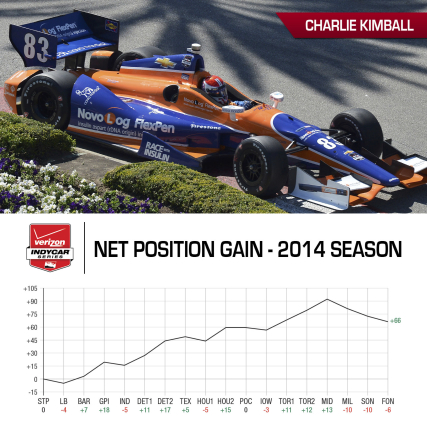 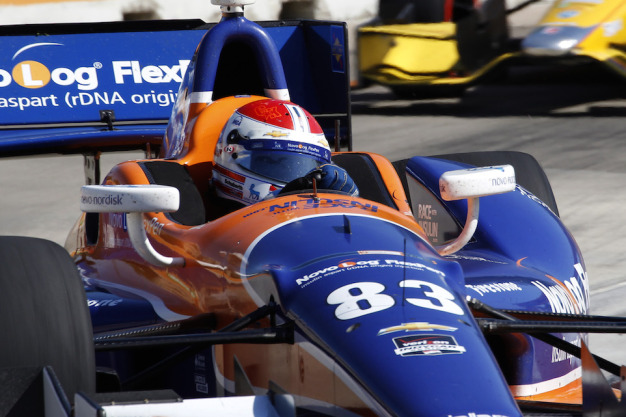