At least one in January

Since I haven’t blogged since mid December, I thought I should blog in January. And, well, as tomorrow is already February (?!?!), this is my last chance!

Things are really busy. I am back based in Indy after some really nice down time for the holidays. The Christmas/ New Year’s period is always crazy, but really good to see all my family and friends that congregate back at home. I also got some time in the mountains with my best friend. We got a couple of days of snowboarding and some chill time by the fireplace (so many meanings since the power was out for a day!). Then it was off to Miami for the Orange Bowl. I had gotten tickets as a Christmas present to go see Stanford take on Virginia Tech. What an experience! It was amazing seeing all the Cardinal faithful from across the country cheering for victory. And I know that I didn’t go to Stanford, but with my family’s legacy and my acceptance, I still claim it. 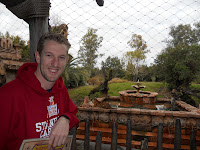 After the game, I spent a couple of days in Orlando enjoying the magic of Disney. I realize that most of Disney stuff is for kids, but I was totally blown away, again, by the quality of everything at Disney World. I had never been to the Animal Kingdom and after a day there, I wanted to go back again! It was spectacular. A really creative way to display the animals and yet give them the room to roam in a very natural habitat. Plus the rides are very cool. The Everest train ride was awesome and the Dinosaur ride really caught me by surprise. All in all, I really enjoyed myself and would go back in a heartbeat.

And then it was time to head from the warm Florida sun to the cold and snow of Indianapolis. It was nice to be back in Indy though. I have been working really hard in the gym to get ready for the season. I have also been spending a fair bit of time at the race shop with my team. I have been continually impressed with the caliber of people involved and I can’t wait to drive the car for the first time! The car is now being painted, prepped and when it gets back to the shop it will be full speed ahead before the first test, hopefully soon.

And if that wasn’t enough, I moved house this last weekend. With the help of James Hinchcliffe, Philip Major and Stefan Wilson, we got all the stuff moved on Saturday. Moved however, does not mean ‘moved in’. There are still stacks of boxes around and lots of settling in left to do. I haven’t gotten my office set up yet, so I am writing this on the dining table. But having Internet and a dining table is a success in my mind!

Finally, I want to congratulate all of my teammates at Chip Ganassi Racing, Chip, Mike, Timmy and all the crew on the Grand-Am Rolex Daytona Prototype cars. They finished the Rolex 24 hour race first and second separated by a mere 2 seconds after a full 24 hours of competition! With that win, Chip has won the Daytona 500, the Indy 500, the Brickyard 400, the IZOD IndyCar Championship and the Rolex 24 Hour, all in 12 months. It’s a great start to a promising 2011!