Yesterday was a very successful start to my 2010 season. While I had tested with the crew at Andretti Autosport late last year, this was my first test as an ‘official’ driver for the AFS Racing/ Andretti Autosport Firestone Indy Lights team (say that 10 times fast!). It really is an honor to be a part of a team that has such a history in Indy Lights as well as being led by a driver with the heritage of the Andretti name. I remember growing up with Mario Andretti being a household name as a success in both Indy racing as well as Formula 1. Now with Michael (Mario’s son) being involved in my team for this year, it has come full circle. I will also be exposed to all four of the Andretti Autosport’s Izod Indy Car drivers: Tony Kanaan, Marco Andretti, Danica Patrick and Ryan Hunter-Reay. Hopefully I will get a behind the scenes look at how a top level Indy Car operation is run and will be able to use this knowledge in the future as I move up the ladder.

But back to yesterday’s running at Sebring. Sebring is a great track to test for street circuits. With the hot summers, lots of rain and soft ground of central Florida, Sebring is a notoriously rough track with lots of bumps, road crowns and low grip. All of these mimic a street circuit and make it a great place to tune for 2 of the first 3 races of the season (St. Petersburg March 28th and Long Beach April 18th). Our day didn’t go perfectly as the shift cable broke on my second lap of the day and we had a niggling problem with the starter motor , but we got plenty of laps in and made some good progress on the car. The mechanics were on it all day and even though it was my first official day driving with the team, it felt like we had worked together for a lot longer. I am developing a good relationship with my engineer both at the track and away from it. A lot of the changes that my engineer and I made during the day were to tune the car towards my personal driving preferences. Since AFS/AA has won the Lights championship the last two years and sat on pole for every street/ temporary location race last year, their street circuit car is already pretty good. The engineers had done some hard work over the winter and wanted to try some things on the car to see if they could make progress. The track grip wasn’t as high as when I tested there last year, but my time was within 0.3 of a second of their best time there. My teammate, Martin Plowman, was within 0.1 of my time which bodes well for a strong competitive season for both cars and the whole team. In conclusion, it was a great day, a perfect start to the 2010 season and it felt fantastic to be back in the cockpit and back at the racetrack. My fitness held up well, but I need to keep pushing my training with Jim Leo at PitFit in Indianapolis. Never know when that call from an Indy Car team is going to come! 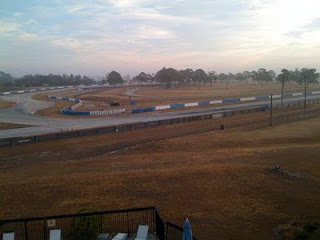