Members of the Red Alert Robotics team are eagerly awaiting the Jan. 9 release of FIRST Stronghold – the 2016 competition guidelines video with the “rally your kingdom” battle cry disguised as a game hint. So is Charlie Kimball.

The Verizon IndyCar Series driver recently welcomed the robotics team from Center Grove High School in Greenwood, Ind., along with its elementary school and middle school counterparts, to the Chip Ganassi Racing Teams headquarters in Indianapolis to recognize its accomplishments and provide a look behind the scenes of motorsports technology.

The release of the video corresponds to the formal start of the FIRST (For Inspiration and Recognition of Science and Technology) robotics competition season.

In just six weeks, the high school students will build, program and test robots with the guidance of adult mentors. The competition robot is constructed with the kit of parts provided by FIRST, and teams can purchase a select amount of other materials to construct the 120-pound robot that performs a multitude of tasks corresponding to the game. The Red Alert team’s budget for 2016 is $60,000.

In 2016, more than 3,000 teams comprised of 78,000 students from around the world will compete in FIRST Stronghold competitions.

Dubbed a varsity sport for the mind, FIRST robotics combines STEM (Science, Technology, Engineering and Math) applications and business practices in which a group of students is involved in the design and programming of the competition robot while other designated team members are tasked with marketing, media and fundraising.

Throughout the semester, problem-solving, organizational and team-building skills are honed.

“One of the really cool things about FIRST is it’s taken what was kind of a free-form robotics arena and created some structure and locked it straight into middle school and high school programs,” said Kimball, who acknowledged to the groups that he and some friends “attempted” to build a robot in high school in California. “You’re developing those STEM elements all through high school so that when these kids apply to an engineering school and put on their applications team captain or mechanical design captain of a state champion robotics team their application is going right to the top of the pile.” 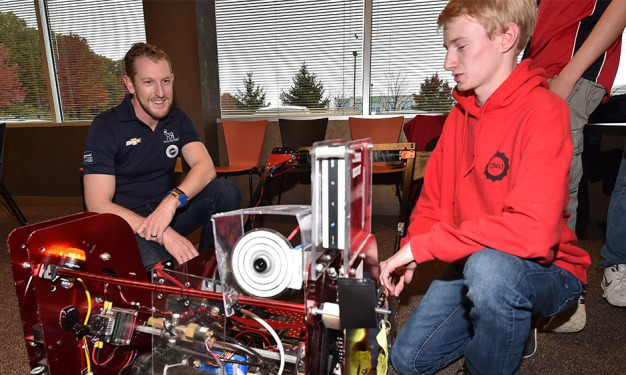