Memory Lanes (Interstate Lanes that is!)

This morning (very early in the morning, I might add) I drove up from home in Ventura County to Sonoma. I took the 5 freeway which runs into the south end of the Central Valley in California and hugs it’s western edge up towards San Francisco. Once you get into the Valley, the scenery stays just about the same until you turn over to the Bay Area. However, I know the road from my house up to the Lerdo Hwy exit on the 5 very well. See at Lerdo Hwy is a racetrack by the name of Buttonwillow Raceway Park.

Buttonwillow is a great track, especially for testing. However, it holds an even more special place in my heart because it is the racetrack where I turned my first laps in a race car. I remember that day very clearly. I had been racing in the go kart in Santa Maria the weekend before my Monday- Tuesday test day at Buttonwillow. As a result, my dad and I drove straight over to Buttonwillow and headed out to the track early on Monday morning with the go-kart trailer in tow. It was a nice day- cool in the morning, but the sun was shining and it soon warmed up to be perfect testing weather. I helped my dad unload the go karts so he could work on them during the day and then I got focused on learning what I had to differently to drive a racecar as compared to a go-kart. I remember my first few laps being a bit of a blur but soooo much fun! I came into the pitlane the first time and told the team (and my dad who had borrowed a radio) that ‘that was the most fun I have had in my life. Ever. Period!’ Apparently, my smile was big enough to see well before I had taken my helmet off.

There were a few other big impressions from those two days of testing. The first was that I needed to really work out if I was going to start racing cars. By the afternoon of Tuesday, I was exhausted! I know I had been racing the go-karts all weekend, but still I remember taking a nap in the car during the second afternoon while the team made some changes to the car. I also remember that the mechanic who strapped me into the car (Big Mike) got the belts so tight that I was sore for a week. I have never had a mechanic be able to strap me into the car that tightly since! The Buttonwillow Ranch brought lunch out the track and we went there for dinner on Monday night. The food was pretty tasty. So if you are ever cruising along on the 5 near Buttonwillow and are getting hungry- stop in for a bite. Although it has been quite a few years since I have eaten there, so no guarantees! The final thing I remember from that first two day test of my racecar career is that I was fast. I ran a lap of 1:06.5 (it might have been a .4) and that was one of the quicker laps the team had seen around that configuration of Buttonwillow. That fact really helped me convince my parents that I should pursue a racing career. Well my love of racing all helped I’m sure. As I drove past Buttonwillow, the Buttonwillow Ranch, the Lerdo Hwy exit and the Buttonwillow buildings next to the freeway, I remembered that first test in a car (and the thousand of miles of testing I did there after that first test). 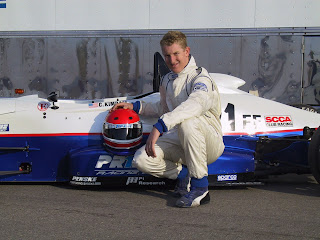 I spent some time at Infineon Raceway (the site for this weekend’s race) today doing a TV interview and then headed out to my hotel for the weekend. Since I have a lot of guests and family coming up this weekend, we have organized a group of rooms at the Hilton Sonoma Wine Country. They have been really good about shuffling room reservations around and when I arrived were extremely hospitable. The hotel is beautiful and I am really looking forward to the rest of the weekend. Not to speak of the racing! But that is for tomorrow’s blog. I don’t drive until Saturday so tomorrow is just a prep day.