I am now on the plane headed from Orlando Florida up to Toronto in Ontario, Canada. I had a race last weekend and have a race this weekend, but got to spend a couple of days near the ‘most magical place on earth’. I stayed at Disney’s Coronado Springs resort where the Children with Diabetes- Friend for Life conference was being held. I went for my sponsor Novo Nordisk as they had a booth there and, because I was coming, they also had a racing car and racing games in the booth. I also gave a presentation to a VERY big room of people with slides about my racing, my diabetes and how I make them fit into my life, my dream, and my passion. I also got to spend some time with friends I have at different companies and with a very cool blogger. But let me start from the beginning.

After the great result in Watkins Glen last weekend, I enjoyed some downtime in Corning (and particularly watching my mom and sister shop in the Corning Ware factory store! Note to guys who are trying to convince wives/ girlfriends/ mistresses/ mothers/ sisters/ chef friends to go to a race: Mention Corning Ware factory store and sales and you will be headed to Watkins Glen to see some racing action!). I also got to see some really neat Corning glass. I stopped into a shop called Vitrix in the Gaffer District of Corning and the whole back of the shop was a glass blowing studio. Here’s the photo of the artists hard at work. 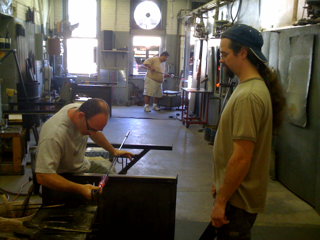 Then Tuesday morning, it was time to hit the road again. Caught a flight to Orlando (via Philadelphia- which has much better food options than LAX- mmmmm tasty Au Bon Pain!) and arrived in the midst of a heavy thundershower. At least it was warm. And Humid. Very Warm. And Very Humid. I got to Coronado Springs and remembered why I love Disney so much. Everything is so clean, so manicured and so prepared. After checking in and dropping my bags off in my room (a solid half mile from the front desk no less!), I met up with my sponsor to run through my presentation in the room where I would be in the morning. I walked into the room and was struck by two things. Firstly, it was A BIG ROOM! With lots of chairs for lots of people! Eeek. After the panic had subsided, I turned aorund and jumped out of my skin. I was already standing there. Well a cardboard cutout of me. I was very surprised to see myself already in the room. They hadn’t told me they were going to have a cutout made (or if they did tell me, I forgot-which is probably more likely) but it looked really good. I had to take a photo with me. We ran through the presentation and made some tweaks to the photos I had. I was very happy to have all racing shots with my helmet on, but they insisted there were some where people could see my face! Then it was back to the room, some final tweaks on the slideshow, send some emails and crawl into the very very comfortable bed.

When I got up in the morning, it felt like the morning of a race. I was out of bed before my alarm, the adrenaline was running and I was ready to go. The nerves at the size of the room from the night before were gone. At 9, with a lot of the seats filled, I started my presentation. It went very well! I seemed to be pretty well received and think I managed to get my point across and tell my story. I had a lot of questions asked- both about diabetes management as well as racing in general. I then signed autographs for just over an hour and took photos with some kids. I had a lot of the parents tell me that I was an inspiration and thank me. But looking at those kids with their multicolor pumps, medical alert bracelets, bright eyes, easy smiles and the willingness to deal with their diabetes for the rest of their lives proved to me that it wasn’t as simple as calling me an inspiration. I look at those kids and am inspired- overwhelmingly so sometimes.

After the autographs and photos were done, I headed back to my room to answer some emails, get the press release distributed, tweet, and check in on some sports scores (Go Lance! And Go Dodgers!). Then I actually got some time off! I put on some shorts and went to sit by the pool. I read a bit, listened to music and properly relaxed for a few minutes. As the clocked neared the opening of the exhibit hall at 6PM, it was back to the conference center, have a Superman moment (change into my race suit in a bathroom), and be ready for the opening of the doors. I had to weave my way through the crowd to get into the hall so I knew it was going to be busy. When the doors opened, the kids rushed in screaming and already having a blast. Novo Nordisk had a show car there in their colors and that was an insta-hit. The kids all wanted autographs and photos with me. The hall was scheduled to be open for three hours and I thought that I was going to be bored by 7:30. Boy was I wrong! I never stopped moving and the first time I checked my watch (fully expecting it to be 7 o’clock), it was 8:35! Such a blast. All of those kids and their parents having fun, learning, hanging out with other people with diabetes, being kids was so cool to see. And since this time I had my race suit on when my cardboard cutout was there, I had to do the mirror image picture! 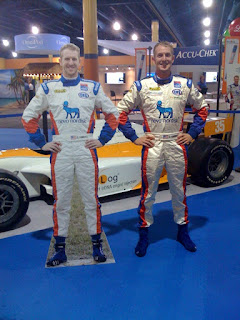 After the hall closed, a few friends of mine from DexCom and my friends from Novo Nordisk headed to grab a drink, sit down and rest our legs. After ordering my Diet Coke (on the rocks- of course), I was thrilled to see my favorite diabetes blogger. Mrs. Kerri Sparling. And yes she is cool enough to get her own sentence when introduced. Kerri is not only a super cool person but she is also a very influential diabetes blogger that does a great job representing the diabetes community. There is no one I would rather have keeping an eye out and trying to influence change on behalf of me and the rest of the diabetes community than Kerri. She is so high energy, fun, and has lived, fought and beaten the ‘betes for over 20 years. We sat and talked and laughed and all in all had a good time. She had never seen my helmet with the drinks tube before so she wanted a few photos of that. I am sure they will find their way to her blog/ flickr/ twitter one day when she stops to catch a breath. Although I don’t think she ever really stops. Or slows down! She mentioned that she follows me on this blog and that makes me way nervous. All in all it was a great trip. And even better, I am on a plane on my way to another race!

I am really excited for the race in Toronto. After last weekend’s results, the team’s confidence and my confidence are at an all season high. We left Long Beach with a great race car and since Toronto is a street race like Long Beach, I am sure we will have a good starting point. I get there midday today and will walk around the track this afternoon. It was pointed out to me yesterday that my ‘tweets’ about walking around the track make people laugh because ‘you are supposed to drive around the track!’ Well yes, but having never driven there, it will give me a good first impression to walk the track, look at all the big bumps and sight pictures.

Follow the coverage of the race weekend on my Twitter or on the Indy Lights site. Also the race will be shown live on IndyCar.com.

And one last comment about Kerri and her blog- SixUntilMe.com. She is cooler than she seems online because she can change a set of brake pads and rotors!