What a Whirlwind Week! Part 1 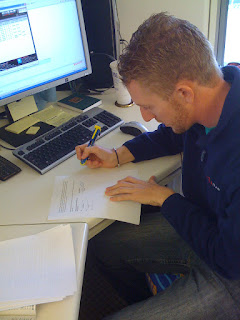 Wow- what a week! In the course of the last 7 days, I have signed my deal with the team for the season, had breakfast in Camarillo, lunch in Burbank, dinner in Dallas, missed a flight connection, had an airline give me a room for 8 hours, arrived in south Florida, had a meeting on the beach in Miami, met my new team, drove my new car, went fast, taught teenagers about car control, did a radio interview, finalized my race suit embroidery layout, finalized where I am going to be sleeping for the next week, and watched almost an hour of television. Oh and worked out a few times.
OK- that left me breathless. Let me start from the top. I signed with Team PBIR for the 2009 Firestone Indy Lights championship. The release is here. I will be driving the #35 car. When I signed the deal, I headed to the team and track here in Palm Beach as quickly as I could. That meant I had breakfast on Sunday with my parents in Camarillo (at the same place frequented by mens doubles tennis superstars, Mike and Bob Bryan), then lunch at Bob Hope Airport in Burbank. All going to plan- and then the plan got thrown into the trash. The winds had kicked up and so our plane was too heavy to take off. So they tried to pump the fuel out of the tanks so we could take off. Then there was an electrical problem and it took longer than expected to empty the tanks. Then we took off and flew….for 11 minutes. To Ontario, CA. Landed, fueled (took longer than expected because the fuel truck broke down!) and finally took off for Dallas to connect down to Florida. We landed in Dallas an hour after my flight was supposed to leave. I checked on my iPhone and my connection actually left early!?!?! So I headed for the service desk and they gave me a voucher for a hotel room. They had already booked me on the first flight out in the morning. It would get me to Florida 12 hours later than originally planned, but it wasn’t the end of the world. 8 hours later, headed out of the hotel, through security and back onto an airplane headed to Florida.
So I made it to Florida…Finally. I got introduced to my team management and all the people that work in the offices of the track (Palm Beach International Raceway) down here. Spent most of Monday and Tuesday working flat out on sponsorship stuff, PR planning, getting the announcement about my signing out, logistics for the first few races and the gym. Then Wednesday I had a meeting with one of the contacts from down here. We went to his office, right on the beach in north Miami. What a view!!! Crystal clear water, sun, sand, surf- it was unreal and made it difficult to focus on the meeting at hand. 🙂
I just realized how long this blog is going to be so I will stop here and post the rest tomorrow. My first impressions are super positive for the year- I can’t wait to get to the first race! Plus pictures of the first test day will be up here too.
To be continued….
Prev Article
Next Article