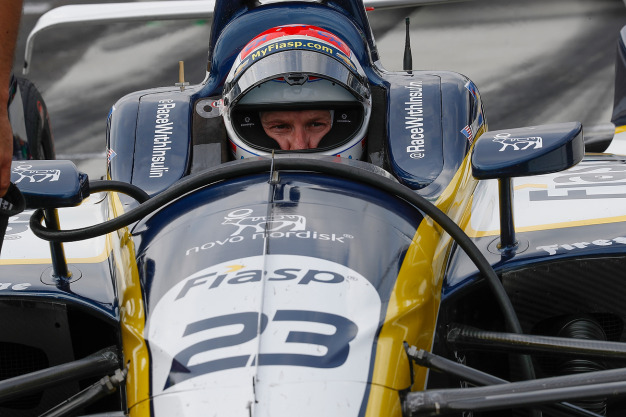 Racing driver Charlie Kimball has qualified for the 2019 Indianapolis 500, which will be run on Sunday, May 26. He’ll be starting in Row Seven, with a four-lap qualifying speed average of 227.915 mph. But that might not be the most impressive fact about Charlie Kimball’s racing career. Charlie Kimball races with a disability – type 1 diabetes, a condition that he must monitor daily. Kimball is the first licensed IndyCar driver with type 1 diabetes.

Type 1 diabetes is a chronic condition in which the pancreas produces little or no insulin, the hormone needed to allow glucose to enter cells to produce energy. Type 1 diabetes currently has no cure. It is treated by managing blood sugar levels with insulin, diet and lifestyle. It usually appears during childhood or adolescence, and was once known as “juvenile diabetes.” Kimball was diagnosed with the condition when he was 22, a little later than normal, and has been working with his doctors and trainers since 2007 to maintain his health and fitness.

“I got back into a race car three months after my diagnosis,” Kimball said during a phone interview. “My first race after diagnosis was six months later, and I finished second.”

Kimball has developed systems to manage his blood sugar levels during races. “I use a continuous glucose monitor that is connected to my car’s dash, so all my data is in one place,” he said. Tire pressure, gas and glucose levels all show up on his car’s monitors. He also has a special hydration system. “Most race car drivers use a water bottle to keep them hydrated during races, which can last three plus hours. I have two water bottles, one with regular water, the other with orange juice with added sugar.” Kimball’s father’s expertise came in handy. “I worked with my dad, who is a mechanical engineer, to create a special valve for these two bottles, and we 3D printed it,” he said. “It connects to my seat belt, and with a flick of a switch, I can adjust my glucose level depending on which water bottle I select.”

Kimball uses Tresiba and Fiasp insulins, products from one of his racing sponsors, Novo Nordisk. “We’ve been working together on the Race With Insulin program for a total of 11 race seasons,” he said. “I spent two years representing them for Indy Lights, and this is our ninth season in IndyCar. It’s great to be able to represent the diabetes community on the racetrack, and to inspire people to do anything they want to do in life.”

Kimball maintains a rigorous training schedule to maintain his physical and mental fitness for racing. “I work with a gym called PitFit Training in Indianapolis,” he said. “They train race car drivers almost exclusively. The biggest change in my fitness regimen since my diagnosis is how I prepare for a workout, as various workouts affect my blood sugar differently.”

He works with an exercise physiologist, David Ferguson from the Department of Kinesiology at Michigan State University. “We’ve been working together for 10 years,” said Kimball. “He examines physiological data and blood sugar data from my racecar, and has narrowed down the ideal blood glucose level for me to get into the racecar.” In addition, Kimball works on his reaction-based timing, as IndyCar drivers must deal with events that occur at 200-plus mph as they navigate the traffic on the track.

Away from the track, Kimball’s diabetes still must be managed every day. He relies on his wife, Kathleen, who is very tuned in to his condition. “She can just look at me and tell if my blood sugar is low,” he said. The family also has a secret weapon – Lilah, the Labrador retriever. “When we first adopted her, she was looking for jobs to do – barking at anyone who came to the door, or rearranging our garden,” he said. “Really, we think she was just bored, so we enrolled her in school – and that’s when we discovered that she could be trained as a diabetic alert dog.” Now, Lilah is part of Kimball’s diabetes management toolkit. “If my blood sugar is getting low, she comes up and pokes me in the leg with her nose,” he said. “She is also trained to alert my wife if I’m not responsive. As a black Lab, she’s very food-motivated. And she knows if she accurately alerts me to low blood sugar, she gets a really good treat.”

Kimball became the first driver with diabetes to win an IndyCar race when he took the checkered flag in the Honda Indy 200 at Mid-Ohio in August 2013. In that same year, he won his first Rolex 24 at Daytona, driving for Chip Ganassi Racing with Felix Sabates with teammates Scott Pruett, Memo Rojas, Juan Pablo Montoya. His best finish to date in the Indianapolis 500 came in 2015, when he finished third. Look for Charlie Kimball in Sunday’s race in the Number 23 Fiasp Carlin Chevrolet, starting in the middle of Row Seven.