Both Flynn and Kimball have been able to manage their diabetes and continue doing what they love to do.

“Other than controlling it there’s nothing you can do about it,” said Flynn, an avid baseball player and racing fan. “You have to learn to take care of yourself.”

During Saturday’s Detroit Belle Isle Grand Prix activities, Kimball invited Flynn out to be part of his team for the race. The two chatted inside his car hauler an hour before Kimball competed in the first of the Chevrolet Indy Dual in Detroit races.

“That will be the biggest challenge if it rains here,” Kimball said, as ominous storm clouds gathered outside. “It will be slippery. A lot of guys will spin out.”

Kimball, who drives the No. 83 car for Chip Ganassi Racing, was diagnosed in 2007. He had to quit halfway through the season, but was able to come back the next year, making him the only licensed driver in the history of IndyCar with diabetes. Novo Nordisk, the pharmaceutical company that manufacturers the insulin he uses, sponsors him.

Flynn, who attends Our Lady of Sorrows Catholic School in Farmington, has to use an insulin pump, which he carries with him at all times. He hasn’t let it stop him from having an active life. 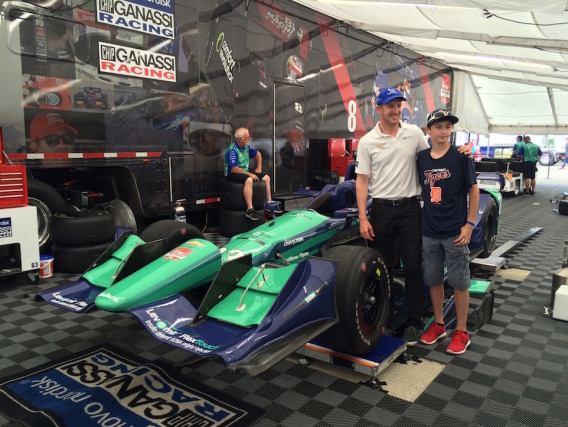