Kimball, who will make his 109th start Saturday (8 p.m. ET, NBCSN and the Advance Auto Parts INDYCAR Radio Network), set one- and two-lap INDYCAR qualifying records on the 1.5-mile oval to earn the first starting position for the 248-lap race.

Kimball averaged 222.556 mph over two laps in the No. 83 Tresiba Honda to beat the old record held since 2013 by Will Power by more than 3 mph. Kimball’s qualifying run was more than a full second faster than Power’s previous standard.

“I’m really excited to be on pole. The guys totally deserve it,” said Kimball, whose second qualifying lap of 23.2730 seconds also eclipsed the 14-year-old record of 23.5031 seconds held by Gil de Ferran.

“The No. 83 Tresiba Honda was really good right out of the box and Todd (Malloy, engineer) made a few adjustments that made it better during the course of practice. During qualifying, we just took a swing at it and went out and got the job done.” 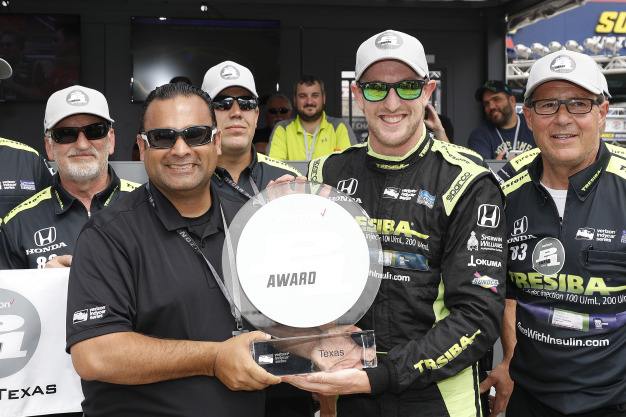