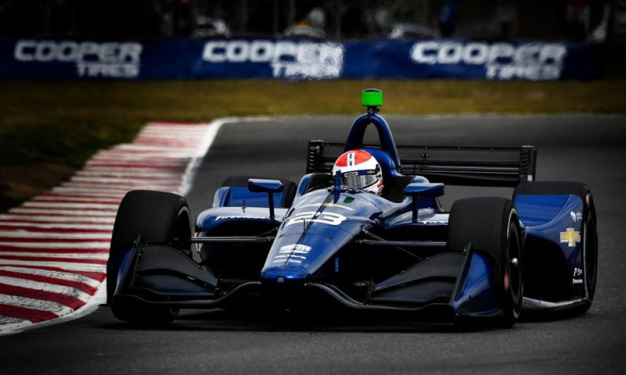 As Carlin Racing’s Charlie Kimball can attest, sometimes a 10th-place finish feels like a podium. The NTT IndyCar Series veteran was thrust into the No. 23 Chevy for the Portland Grand Prix, and in a result that’s typical of the Californian’s career, he turned a poor day of qualifying into something positive. Motoring from 23rd to 10th, Kimball produced Carlin’s top performance on Sunday which, under normal circumstances, wouldn’t be cause for celebration. However, 2019 has been anything but normal for Trevor Carlin’s outfit.

As the British team nears the end of its sophomore season, it’s faced constant change in the cockpit as six drivers have rotated in an out of its seats, missed qualifying for the Indianapolis 500 with two of its three entries, lost Patricio O’Ward to the Japanese Super Formula series, had lead driver Max Chilton cut the remaining ovals from his calendar, and made a midseason engineering change on one of its cars.o

To have Kimball making steady improvement late in the season, and Chilton, who ran in the top 10 late in the race until falling to 11th, showing well at Portland speaks to the resilience of the Carlin team and its drivers.

“I’m just happy for these guys because all year they put so much effort in,” Kimball told RACER. “I see it when I’m not in the car almost as much or more than when I am behind the wheel because they’re one of the last ones to leave every day. They’re the first ones here every day. Qualifying was tough for us. Part of that was my not being on a road course since Sonoma last year. Part of that is just getting up to speed and getting going. Once we got there, we got up front. I made a couple of mistakes after the second restart, lost a few spots, but then, it was just metronomic.

“It’s nice to really shake all the rust clear before we get down to Laguna for a double points race. Not that we’re in the points championship, but points are always good. It was honestly, it just came down to strategy, great pit stops, giving me the fuel number and me being able to hit it. Of course we want to be talking about podiums and wins, but we’re pleased with the progress we’ve been making. Such things do not happen overnight.”

The nine-year IndyCar veteran will complete the season having contested seven of the 17 races on the schedule, and is actively working to make a full-time return in 2020. Longtime sponsor Novo Nordisk, and new energy optimization partner ripKurrent, could play significant roles in helping the 34-year-old achieve his goals as he explores business-to-business relationships in the paddock.

“We’re working hard with our partners towards next year,” he said. “The ripKurrent guys had so much fun being with us at Gateway. They were so enthusiastic. The result, we were knocking on the door of the top 10. They just loved it. I think with their business model and some of the business opportunities within the IndyCar product, some of the big energy consumption people like Preferred Freezer on the Ed Carpenter cars, I recently went, ‘Oh, I should introduce those guys to them.’

“There’s just some big energy consumption brands within the sport. Maybe NTT Data and some of their server sites. I think the more I can give them a business reason to back up their enthusiasm, they’re already talking about what next year looks like. Novo Nordisk is talking about next year. Carlin talked about next year. Honestly, at Portland, I was just focused on trying to find my feet again, but beyond that, it’s working to create the best [2020] season possible for myself and my sponsors.”